Some time ago I posted about an ancient piece of EDA software called Stripboard Magic, which was made by a small British company by the name of Ambyr. I have been hosting copies of this now long-dead software for some time, as it still seems to be in popular demand long after being abandoned by it’s creators. I have been contacted by a reader about the existence of Service Packs for this application, which neither of us have been able to locate.

From what I have been able to gather, Ambyr ceased trading around 1999-2000, after having sold the rights to distribute Stripboard Magic to Maplin Electronics. What I’m not certain of is the timeframe of these service packs appearing, or where they could originally be found, the Ambyr website apparently vanished about 6 months after Stripboard Magic was originally released, but they were presumably intended to make the application easier to use & less buggy.
Unfortunately the timeframe for the company’s existence was before the Wayback Machine started archiving the internet, and the only record they have of Ambyr is a domain holding page dating back to 2000.

If there are any readers who have copies of these service packs, or some information on where they can be found, or indeed any more information in general about this seemingly short-lived company, please drop a comment or E-Mail me directly through the Contact Page. Inquiring minds need to know 😉

Stripboard Magic is a Windows application for designing PCB layouts on stripboard (aka prototyping board, aka Veroboard). It was released by a British company called Ambyr which ceased trading a long time ago.

The interface is a quite primitive and a little strange but the program is functional even on Windows XP. It also works great under wine in Linux, at least with version 0.9.38 and above as this is all I have checked. It should probably work on older versions too. I haven’t tried it on Vista though.

It can be a handy program when called upon and I have successfully used it a few times when throwing together random small circuits. Due to the interface I would imagine it to be a bit clumsy for very large circuits. The biggest gripe I have with it is the inability to change the orientation of components on the board, so some circuits tend to be slightly larger than they need to be.

I downloaded a copy of Stripboard Magic 1.0 back in the 90’s and recently just found it lying about on my computer. As I would consider it to well and truly be abandonware and as it seems to be a little sought after by some hobbyists I have provided a link to download it below.

Here are some screenshots showing the schematic view (top) and board layout view (bottom): 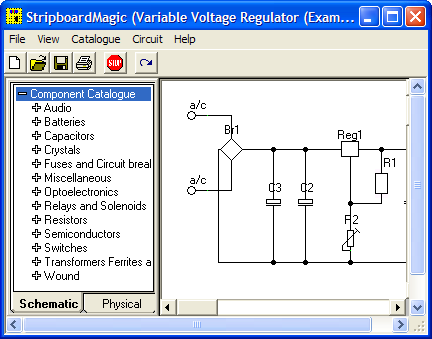 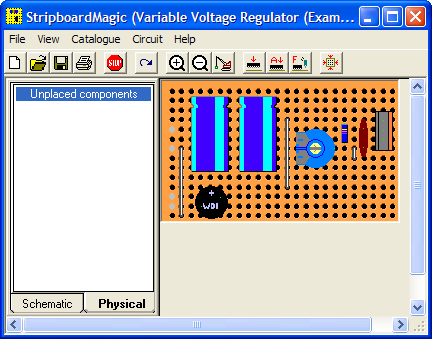 Another hard to find app these days is Stripboard Designer, mirrored here for people who wish to use it.