The time has come yet again, to reduce my rack footprint. For the last 5 years or so, this blog has been hosted on a small HP MicroServer Gen8, as at the time I needed a new host machine, and for some reason they were going by their thousands for rock-bottom cash. That machine has faithfully worked 24/7, without many gripes, but it’s time to concentrate things down to requiring less physical hardware.

What’s enabled me to sort this out, is performing a hardware rebuild on my main file server, which has for years been a Heath-Robinson affair.

Well, the file server got ANOTHER upgrade, quite quickly. The motherboard was replaced again, this time with a new board, new Corsair RAM & a new Intel i7-9700F 8-Core CPU. As this server also runs video transcoding services, the tiny GPU got pulled & replaced with a spare nVidia GTX980 I had just for that task. My LSI RAID cards are still used as HBAs, just as JBOD, since Linux is running the main disk array via mdadm.

Once this upgrade was completed, with space for resource expansion – the motherboard supports up to 128GB RAM, at the moment there’s 32GB in there due to the eye-watering cost of RAM at the present time – there was scope for running some Virtualisation for other services.

Still running OpenMediaVault, based around Debian 10, I installed the Kernel KVM modules & QEMU, along with Cockpit for control. Going this route was dictated by VirtualBox not being directly supported in Debian 10, for reasons I don’t know.

Once all this was installed, and a network bridge set up for the VMs through a spare network interface, I brought up a pair of Debian 10 servers – one for PiHole which had up until this point been running on a spare Raspberry Pi for the last 6 or so years (I think the SD card is totally shot at this point!), and one for my web App server.

At the moment, all the VMs are running from the main RAID6 spinning rust array, which is a little slow, but the next planned upgrade is to move the VM subsystem to it’s own RAID10 array of disks, hopefully speeding things up – there are just enough SATA ports left on the motherboard to accommodate 6 more drives, and with both 5.25″ disk bays being available for caddies, this should be a simple fix.

As a result, I’m down to a single server powering my entire online domain, and a reduction in power usage!

Now the cell modules have been removed from their original home, it’s time to get them repurposed! A custom mounting board has been constructed from timber, and the modules mounted on them. To say this assembly is heavy would be an understatement – it’s barely a two-man lift!
As assembled in the car, the pack as 96S1P, with every cell in series. As we need a low voltage bus, the modules have been reconfigured for 4S4P, in total this makes 4S24P with all 6 modules bussed together. As the cell interconnects are laser welded, some ingenuity was required here.
It turned out the best method (and the safest, to avoid any swarf shorting out cells!), was to use a grinder to cut off the top of the loop on the aluminium interconnects, separating them.

12 5-way bus bars have been installed on the board, and 25mm² cable links them together. To get the angry pixies from the cell modules, 8mm² flexible silicone cable has been used, 4 links to a bus bar. This setup should provide more than enough current capacity.

Here can be seen the cell interconnects – and the grinder cuts to separate them where required to break the module up into 4S strings. As the interconnects are Aluminium, special solder was required to get the copper cables soldered down, in my case I used Alusol 45D solder, which contains a very active flux capable of stripping the oxide from the Aluminium.

Finally, here is the new pack, all connected together. All that needs to be done now is the balance wiring loom, which will allow the BMS to sense each cell voltage individually, and connection of the BMS, Coloumeter & fuses, this will all be covered in a future post!

Well, while working on the boat’s engine, I was surprised by this little sod, who’d managed to crawl into the air intake skin fitting on the transom, and got very irritated at the engine being fired up! How the little dude avoided getting sucked into one of the cylinders, I have no idea! The wee mouse was recovered from the air intake & released on the towpath. 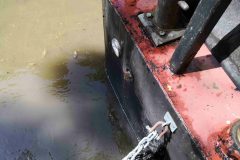 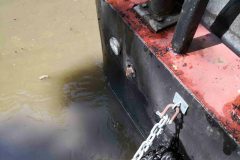 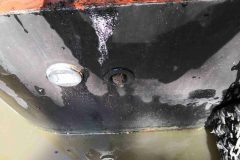 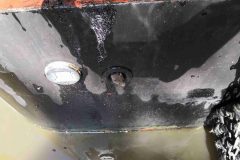 0
Category: Randoms
Tip Jar
If you’ve found my content useful, please consider making a donation via the link below!
All collected funds go towards new content & the costs of keeping the servers online.